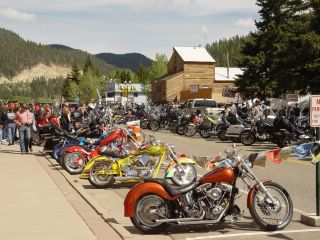 I worked in Red River, NM, at the Mother Lode Saloon, on Friday Saturday and Sunday before Memorial day. It was pretty insane, with all of the people there from all over the country, and some from around the world too.

My job was security, so either I checked ID to make sure no one was underage, or walked around inside and outside, to make sure there were no problems. Other than the really long hours of doing 12 hour shifts, it was not too bad. The bikers were actually well behaved considering the large amounts of alcohol, and the large number of people there.

One thing I did notice however was that many of these bikers are very patriotic, and take veterans issues seriously. Many of them had patches on their jackets denoting military service, and I tried to thank each one of them I saw for their service. One of the musicians playing at the Saloon played Star Spangled Banner on the guitar, and did a great job, getting a big reaction. I would love to see one of those America-hating flag burning idiots, whether domestic or foreign, try that crap at a biker rally. The results would probably be a bit painful for the misguided arsonist.