What is Memorial Day? 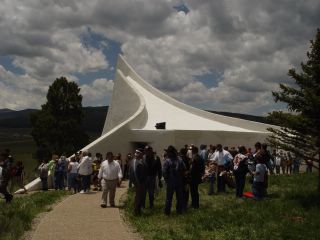 Its unfortunate, that for so many when they hear of Memorial Day, all they can think of is drinking and partying, without any remembrance of what it is about. For all too many, its just a weekend of intoxication, which is fine, but there is a much deeper meaning to me to Memorial Day.

So many veterans have served, and all too many have made the ultimate sacrifice, in conflicts from the Revolutionary War, to present day action in Iraq. On Memorial Day, I drove down the hill to the nearby Angel Fire Vietnam Veterans Memorial that is cloose to my house. There were many veterans there and some currently serving. You really cant help but get a lump in your throat at times, at the ceremonies and seeing some of the exhibits inside. Some Army helicopters were there, Governor Bill Richardson, and the New Mexico Air National Guard (Tacos) pair of F-16s did a flyover.

The man who came up with the Memorial here, lost a son in Vietnam and decided to build this in remembrance of him. It turned into a place of emotional healing for many veterans who visit, or those who have lost loved ones in war. Many veterans looked up to Dr Westphall as a father figured and loved him. Unfortunately, he died in late 2003, and his wife died in 2004. But the memorial serves as a lasting reminder of the sacrifices those have made, and the pain that was felt when they were lost.