Made it back safely 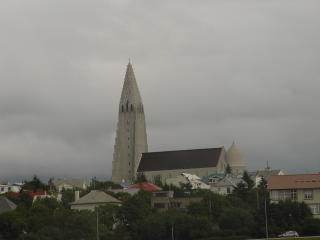 The trip went well, I had a good time. It began in Lakelake FL, where I picked up the 2005
Piper, and from there, went up the coast, with fuel stops in Brunswick Georgia, and overnighted in Salisbury MD. The next day, it was one hop up to Bangor Maine for the night.

After clearing customs the next morning, it was 6 hours to St Johns, which was a rather fun place to be. I dont think I got quite enough sleep all on this trip, especially since you tend to lose 1-2 hours a day from time changes. I saw a fuel leak from one of the extra tanks installed inside, so we patched it up and waited a day to make sure it held, which gave me an extra day to explore St Johns.

From there, it was 13 hours overwater to Reykjavik Iceland, where I got in about an hour after sunset, which was almost 1am when I arrived. The photo here is a famous church in Reykjavik.

The next days journey took me to Wick Scotland, with headwinds most all the way, sometimes only doing 100 knots speed. After almost 6 hours, I did an instrument approach really really low, lets just say I was glad it was flat. Stayed in a bed and breakfast outside of Wick, out in the Scottish countryside.

From there, it was 4 hours over the North Sea to Odense Denmark, where I got to spend 2 days before coming back. Alcohol is quite expensive there, since a beer with dinner can cost you 8 dollars. Dinner for 2, with a beer apiece, will run about 50 at least. Odense is known for being the birthplace of Hans Christian Andersen, and his name is everywhere around the part of town I was in. Oh and the hotel room, was about as big as a big walk in closet, a full side bed might not have fit. But breakfast was good, and I brought back some Nutella!!