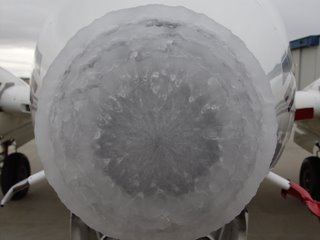 Its not bad I admit, when I have not had to fly in a month. I do enjoy flying, but its also nice to have so much free time, especially compared to this summer when I worked every day, flying 1-2 times per day.

It was actually pretty crappy for cloud seeding, I could see that while I was driving to the airport at 4am, but hey, its not up to me to decide when to fly. So I did my flight, came back and slept. Looks like tomorrow I will fly again too!

Here is the plane with a bit of ice on the nose after a recent flight.

Comments:
A bit of ice?!?! I'm not allowed to fly in anything worse than reported light rime, and even then I have to climb or descend through it.

Too bad I was not able to take good pics of the wing roots in flight, those looked really ugly.

And remember, thats the ice left after landing, and the whole nose would have had some on there.